Coroutines on top of Promises.

Coroutines are an old/classical abstraction in the same sense of Promises. Both were introduced decades ago, the former is well-known by its native implementation on the Lua language (which takes inspiration on both CLU and Icon languages), while the latter, by the yet unknown history on the E language (see the history of promises) and the well-known support for JavaScript. The difference between coroutines and promises is that coroutines are synchronous stateful procedures and promises are asynchronous effectful computations, but we can implement one on top of other and vice-versa (this is what we’re doing here).

Coroutines are also different from Threads, the former enables Cooperative Multi-tasking while the latter implies in the Preemptive one. Often said to generalize subroutines by providing multiple entry-points, coroutines allow us to express any sort of complex control flow easily, for example, exceptions, infinite lazy lists, pipes, and so on. This paper explain 2 kinds of coroutines: asymmetrical and symmetrical ones. This submodule in the case implements the first version.

Assuming that you’ve loaded the UNPKG bundle or installed from NPM and required that library as sporadic, to create a coroutine we will just use the following pattern:

The this.suspend(_) operation is called as that to not collide with the keyword yield of generators, but the idea/behavior resemble the same. By calling .suspend(), you freeze the computation and gives back control for the coroutine’s caller (the passed value will be replied for this caller). Said that, this this object will contain the following structure/typing:

Where state can be either 'CREATED', 'RUNNING', 'SUSPENDED', 'DEAD' and both demandsStream & suppliesStream are sporadic.streams (which subscribe to the sent and replied values from and to coroutine’s caller, respectively). While .status(), .demands() and .supplies() can be called outside the coroutine scope, calling .suspend(_) outside the associated coroutine scope, that is, when it’s not 'RUNNING', will throw an exception during that leaked operation. This constraint is implemented due buggy issues to not violate our invariants.

To run a coroutine, we can use:

Where input and output can be arbitrary values. The resume operation expects a valid coroutine object in either CREATED or SUSPENDED state, during the execution it becomes RUNNING, and after the promise resolution, it can be either SUSPENDED or DEAD. If the coroutine is CREATED, the input argument will be passed to the coroutine async function as a parameter. Otherwise, it resolves a pending this.suspend(_) call. After running, if the coroutine is DEAD, it’s due a return statement or a throw one occurring upon execution. In any case, you can use:

To check the final coroutine result, but keep in mind this is the same promise outcome of calling .resume() and the promise switching to DEAD state. In the DEAD state, further calls to .resume(coroutine, value) fail, and the associated supply and demand streams are finally closed. If the coroutine have still pending computations, it will become SUSPENDED, meaning that you can resume that again later.

To help you to grasp/grok the whole thing, the following state machine diagram may be useful: 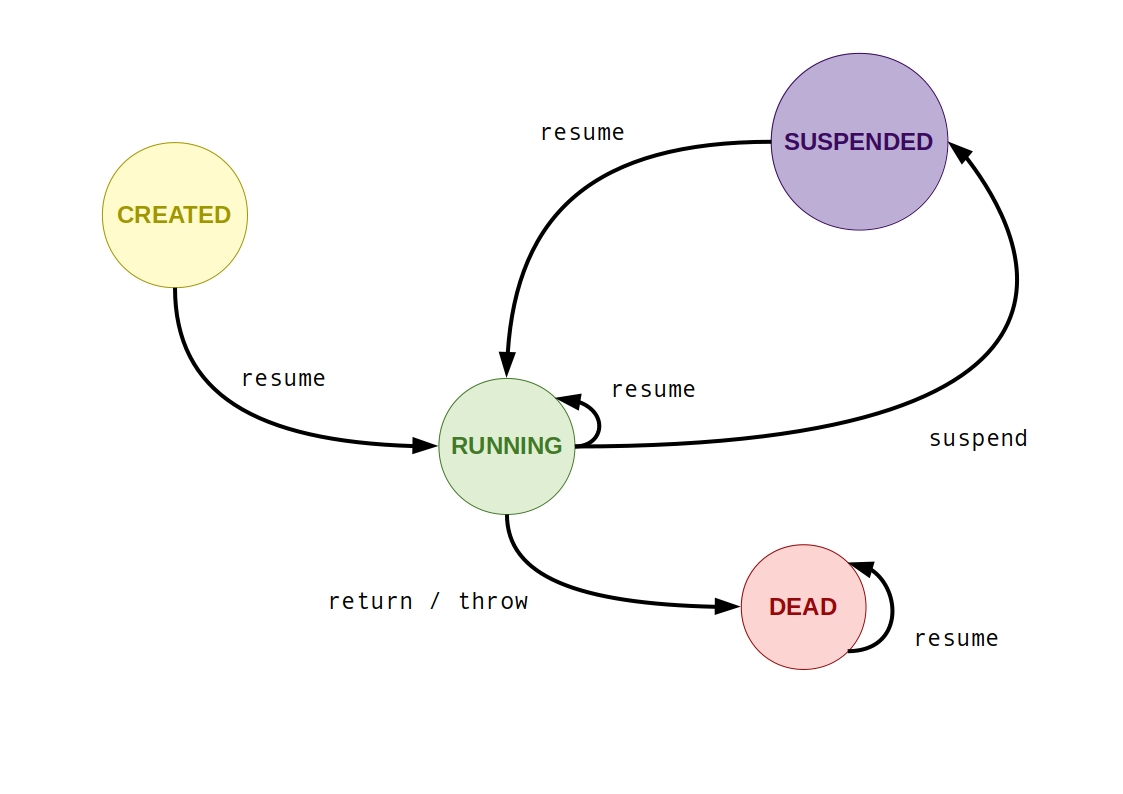 To check the status of any coroutine, we provide:

It’s the same behavior of calling this.status() inside the coroutine execution, the difference is the additional argument to look for some coroutine. The same holds for this.supplies() and this.demands(), only if coroutine and this refer to the same underlying computation:

They are the same stream if the underlying computations are the same, so using the sporadic.streams API on any of them doesn’t make any difference at all. Due such equality, this coroutine configuration may leak/hug memory, ‘cause in the sporadic’s streams model, it’s needed to discard unused previous stream points references. This whole stream points persistence is not a problem if your coroutines are short-lived tasks, but if they’re long-lived ones, such as database connection pools, it can really hurt the application’s memory consumption. To avoid that, you can configure the coroutine a priori:

This streamsMode option will move the stream points forward whenever they’re used. To not lost any events (that is, glitches), in such case, you can call .supplies() and .demands() early (i.e, before the first .resume() call), but don’t forget to move your unnecessary stream points forward as well. If you want to disable the .supplies() and .demands() streams entirely for the coroutine, you can use { streamsMode: 'DISABLE' }. With this 'DISABLE' configuration, no streams are ever created/allocated, and whenever .supplies() and .demands() are called on this coroutine, an error is thrown describing that streams were not created for such coroutine. The default value for streamsMode option is 'PERSIST', where all streams points are persisted during coroutine’s lifetime.

To import all public functions within this submodule, this pattern suffices: